Far From Home takes us on the journey of Brahima Diallo’s life in four countries on two continents. In vivid detail, he tells of his hopes and dreams growing up dirt-poor in Cote D’ Ivoire. At the dawn of the new millennium, he arrives in Mali to complete high school. There, a more introspective, ambitious, and reckless new young man emerges, one who loathes his living conditions and aspires for more. He daydreams of making it one day to the West—or at least to leave his ancestral home. Through hard work, he wins a state scholarship to study English in Algeria.

Brahima recounts his first experiences as a Black student living in the Arab world, where he endured pervasive stereotyping and subtle racism. But while relating the stories of his life there—from the lecture halls of the university to his amorous pursuits—he also tells of the decency, kindness, and generosity of the common folks he encountered.

With a BA in English in his pocket, Brahima makes his way to the United States in search of his dream. Once there, life turns out not to be what he had expected. He works odd jobs to survive— walking dogs, washing dishes, and stocking shelves in discount stores. But he perseveres, earns a master’s degree in political science, and builds a career in social work. He enters mainstream America.

A story of struggle, love, and uncommon resilience, Far From Home is the tale of a strong-willed, idealistic but clear-eyed young man determined to blaze his own trail out of poverty.

Keep up to date with Brahima Diallo, and be the first to know when "Far From Home - An African Son in the Promised Land" is available.

Excerpts from “Far From Home: An African Son in the Promised Land“

The dry season had raced to the finish line. I gazed at the horizon and saw a string of lightning. Thunderbolts flashed before me. The hard-blowing wind brought the ripe star fruits, papayas, and mangoes down by the dozens. Flowers from the acacia tree littered the ground. The still-wet clothes flew off the clothesline and fell onto the muddy yard of our compound. Quickly and unexpectedly, it started to drizzle.

I watched as the animals rushed to take cover against the fury of Mother Nature. The lizards trekked to their refuge by the trunks of the trees. The African fish eagle and the secretary bird jogged to their nest. The rainy season had stuck its neck out.

For a moment, I was a spectator to the game of life.

In the middle of this whirlwind, a rooster walked confidently, with its chest out, in defiance of the hazardous weather. The beautiful plumage on its body was wet but vibrant. The crest on its head was erect, in defiance of fate. The rooster was in charge, the supreme guide of its own destiny. Twice it crowed boastfully, and its large beak snatched earthworms everywhere.

I admired the rooster. One day, I thought, I would be like that rooster. I would mold my destiny like clay, become the sculptor of my fate. By sheer force of will, I would remain on the arena, never running for cover, never waiting for the perfect weather or time to eat. I told myself this. I even convinced myself.

As my thoughts drifted into another world, a heavy downpour started. The cacophony of deafening raindrops hitting the tin roof drowned out the screaming of my baby sister.

I stood inside the door, watching as my brothers rushed to get buckets. The roof was riddled with holes, and without those buckets, our rooms would turn into a lagoon. Already, the courtyard was transforming into a swamp.
I marveled at the toad seeking food. A solitary dog and its bitch roamed, looking for leftover animal bones to fill their empty bellies. I felt pity for the canines. The realization that I was at the top of the food chain made me uneasy. It seemed unjust. Something in creation felt deeply flawed.

Then suddenly, sun rays flashed once again. Our hen got out of its coop and shed the water droplets from its feathers. A pair of snails, whether from curiosity or pushed by anger, crawled here and there. The banded martin and the dusky lark got to work completing their nests. The weaverbirds were again busy making love on the two mango trees in our backyard, shaking their branches. And the ant colony, with the queen at its head, followed by male slaves, started their long march toward the soursop tree.

It had stopped raining. The cycle of life resumed its course, undisturbed. My mother came out of our home and paid two passing loggers to split the still-wet cooking wood. When I stepped outside and looked at the skyline, I saw the arc of an amazing rainbow.

“Damn, God is indeed the almighty. This is so beautiful. I wonder how this is even possible?” my brother Black exclaimed.

“So, you believe God created this rainbow?” I joked.

“Hell yes! Who else could do something like this?”

I stared at him, shook my head, and just laughed it off.

“The boldness to dare, the audacity to soar, and the courage to not yield to fatalism can transform our life beyond imagination. You need to think bigger and always keep a positive mindset—a mindset of growth. You need to expect more of yourself and always reach out for more, because your inner power is more than enough.”

“An hour later, when I thought we would leave the room, another surprise awaited me. I arched and waved under her caress. Her hands made way for her burning lips. The sweet torture seemed never-ending. Her naked torso against my chest made me salivate.

“…It only took a few instants before my desire become hotter than the embers of a fire.”

“I sat motionless and watched the whirlwind of dust in front of me and a rooster angrily chasing a hen for some of good sex. I looked at the bird with astonishment. He ran after the hen just like that. I guess no consent is required in the animal kingdom.

Then, out of nowhere, a family of ducks sprinted for lunch: some freshly discharged goat poop. The waste and feces of one living being was the caviar of another.”

“I glanced at the fake Burberry watch I had bought for fifteen dollars from young African hustlers selling counterfeit items on 28th Street, to check the time. It was three o’clock. I reached into my brown duffle bag and pulled out the counterfeit Polo Sport cologne I had bought earlier and sprayed a little bit of it on my neck. I needed to reassure myself that I was making it in America. I needed to provoke success so it could come to me for a fistfight. I used the free phones commonly called Obama phones. I scratched a two-dollar Boss Revolution pre-paid card. I needed to make a call to my brothers in Mali. I had promised them to do so.” 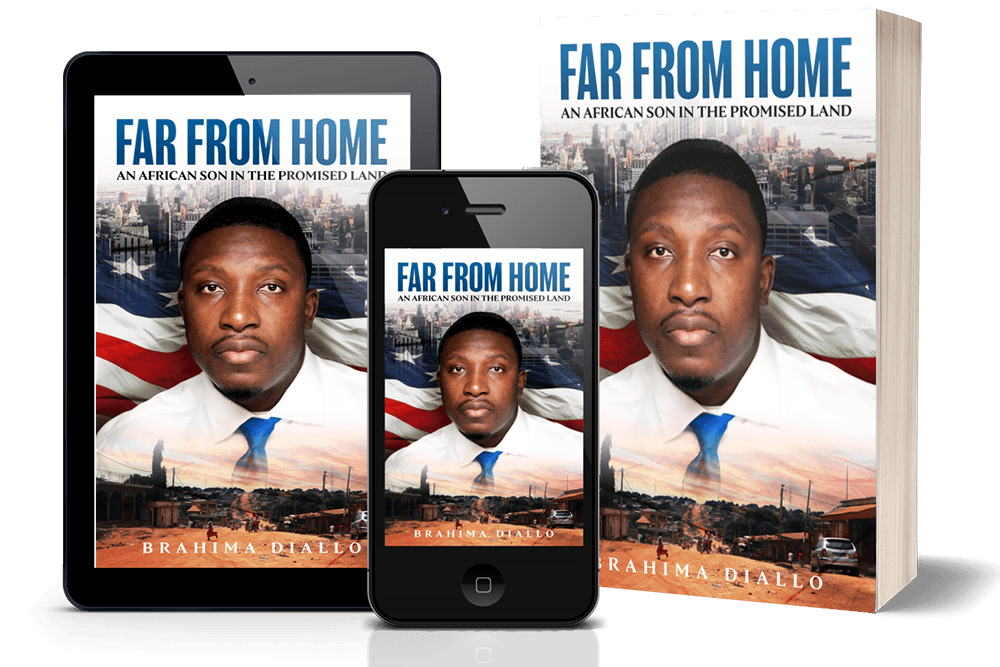